Editorial Note: Sifu Wong Kiew Kit presented a paper on "Qigong, a Cure for Cancer and Chronic, Degenerative Diseases? A Global Interest" at the Second World Congress on Qigong, held in San Francisco, USA from 21st to 23rd November 1997. At the Congress, Sifu Wong was awarded "Qigong Master of the Year".

There is No such a Disease as Cancer!

The question of cancer illustrates an interesting difference of perspective between conventional western medicine and traditional Chinese medicine in viewing disease and health.

That does not mean people suffering from an illness with symptoms which the west would identify as cancer, did not exist in China. They did but they were never identified as cancer patients, and many of them might have recovered without ever knowing that their disease would be called cancer by western doctors. 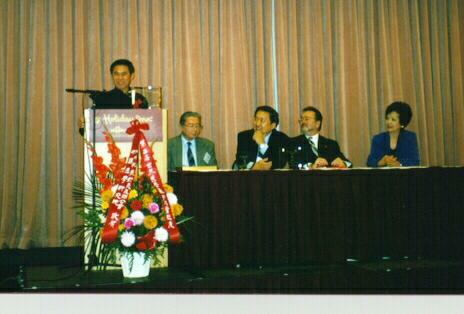 Treat the Cause, not the Symptom

Then how did traditional Chinese physicians identify their illness?

Hence, three patients diagnosed by western doctors as suffering from the same disease such as stomach cancer, would be described differently by Chinese physicians, because the pathogenic conditions that cause the same symptoms can be different.

One patient may be described by the Chinese physicians as suffering from energy blockage of the spleen meridian, another from poisonous heat in the stomach system, and the third from accumulation of fire evil at the intermediate level.

While these diagnostic descriptions may sound funny to western audience, mainly because of cultural and linguistic differences, they are both meaningful and poetic to the Chinese.

To the patients themselves, it can be a difference of hope or resignation, recovery or suffering.

While western medicine uses such treatment methods as chemotherapy, radiation and surgery, which attempt to eliminate the symptoms, Chinese medicine seeks to remove the causes.

Hence, Chinese physicians would not be so concerned as the spread and level of malignant growth, as, in the case of the three patients, clearing energy blockage of the spleen system, eliminating poisonous heat at the stomach system, and dispersing fire evil at the intermediate level. When the pathogenetic causes are removed, the patients will recover as a matter of course.

It is a fallacy to say that cancer is incurable.

It is only when his systems fail to function as they should function, that cancer surfaces as a clinical disease.

Statistics show that one out five persons in the United States has cancer as a clinical disease. The situation in other parts of the world is equally disturbing.

But if we are aware of the environmental conditions we are in, we would probably revise our thinking. According to cancer experts, the two main causes of cancer in human are chemical carcinogens and radiation.

You may be alarmed, or heartened -- depending on your perspective -- to know that we are literally living in an ocean of carcinogens, or cancer-causing substances.

Thus, the moment you step onto a tar road, you expose yourself to a carcinogen.

Radiation In and Out

You may, with tremendous effort and extreme discomfort, avoid chemical carcinogens, but you simply cannot avoid radiation.

An adult has about 100 trillion cells, and each day he produces 300 billion cells to replace cell loss and damage. If just only one cell mutates, if left unchecked, it would lead to cancer.

Everyone Cures Himself or Herself of Cancer

With this awareness, we should ask not why does one out of five persons have cancer, but why four out of five do not.

The answer is actually simple: we have wonderful systems ourselves to overcome not only cancer but all diseases.

For example, millions of cells mutate every day, but they are checked and balanced by our own wonderful body systems. Good health is our birth-right. We are by nature healthy. Illness occurs only if one or more of our body systems fail to function naturally. Illness is unnatural and temporary, and therefore can be rectified.

In Chinese medical philosophy the way to maintain or regain health is to restore the natural functions of our body systems. The Chinese figuratively call it restoring yin-yang harmony, yin representing the natural workings of the body and yang all disease causing agents.

Life is a Meaningful Flow of Energy

There are many approaches in restoring yin-yang harmony, such as acupuncture, herbalism, massage therapy and external medicine, but the most direct and natural is chi kung.

Chi kung, also spelt as "qigong" in Romanized Chinese, is the art of energy. Life, most life scientists today agree, is a meaningful flow of energy. If the flow is disrupted, illness or even death may occur. The forte of chi kung training is to increase energy level and ensure its harmonious flow.

This meaningful flow of energy occurs at all levels of life. For example, at the organic level when radiation becomes stronger, such as when we go into the sun, numerous mechanisms will trigger off the right responses to adjust to the changing environment.

At the cellular level when carcinogens seeps into cells, just the right amount of hormones (many of which are still unknown to modern science) will be produced to neutralize the adverse effect of the cancer-causing chemicals. In Chinese medical terms, this is known as harmonious chi flow.

Recent research using modern scientific methods and instruments has shown some encouraging facts about the effect of chi or energy on body cells.

It has been discovered that 50% of cancer cells in a cultured dish were killed after a chi kung master has transmitted chi into them after 5 minutes -- without affecting other healthy cells.

It is also discovered that the DNA pattern of a sick person is slightly different from that when he is healthy, and harmonizing energy flow through chi kung training can restore the healthy DNA pattern.

If medical researchers place the interest of cancer patients above pride and prejudice, vested interest and group pressure, they should at least conduct further tests to honestly investigate if these claims are true.

It may be assuring to some cancer patients to know that practising chi kung, even if it does not bring the desired cure, cannot make their illness any worse. Even if total recovery is not achieved, their quality of life is almost certain to improve.

They will, amongst other benefits, be able to eat and sleep better, experience less pain, have more energy, and most important of all regain their hope and will to live.

But they should aim for complete cure, for to be healthy is their birth-right.

They should also realize that they need to practise chi kung, and not just some gentle exercises mistakenly regarded as chi kung.

A crucial criterion is that they should be able to purposefully improve their energy flow. Please see the information on CHI KUNG for an explanation of the three levels in chi kung training.

Better still, they should enter into what is known as a chi kung state of mind whereby in this heightened state of consciousness, they can subconsciously instruct the millions of new cells born every moment to be healthy and wholesome, and not automatically follow the cancer pattern of their predecessors. All these can be achieved, for good health is our natural birth-right.

Many people have written to enquire about the possibility of learning Shaolin Kungfu or Shaolin Chi Kung from Sifu Wong Kiew Kit. Please refer to the following for details

You may like to read the full text of
Qigong: a Cure for Cancer and Chronic, Degenerative Diseases? A Global Interest ,
presented by Sifu Wong Kiew Kit to the plenary seesion of the Second World Congress on Qigong.


E-mails without the writers' name, country and webpage reference may not be answered